University Hospitals of Morecambe Bay NHS Foundation Trust (UHMBT) has become one of the first trusts across the country to start vaccinating using the new Oxford AstraZeneca coronavirus vaccine today, (Monday 4 January 2021), with Hilary Birch being the first person to receive the vaccine at the Royal Lancaster Infirmary (RLI). 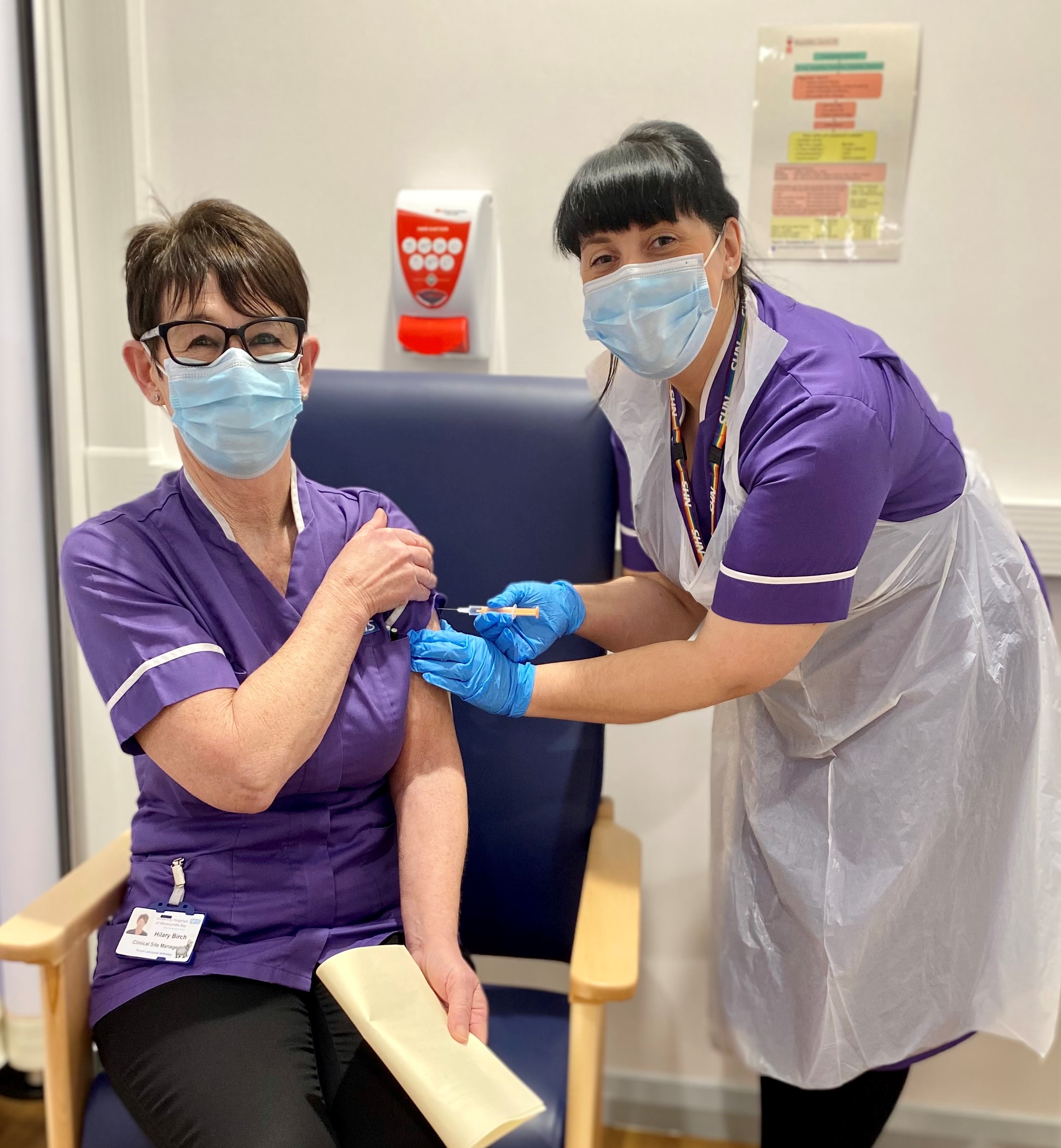 Hilary, a Patient Flow Controller from the RLI, former Matron and mum to four children, has been working for the NHS for the last 34 years and she was the first to receive the Oxford AstraZeneca coronavirus vaccine at UHMBT.

Hilary, 58, who was born in Barrow, lives in Kendal and has worked at the RLI since 1993, said: “It’s brilliant news that the Oxford vaccine is now being given out. It’s going to make such a difference to everyone. I can’t believe I’m the first one at our Trust to have had it – I'm very fortunate!”

Hilary is hopeful that the vaccination programme will eventually make life better for patients, colleagues, family, friends and the NHS.

She said: “If it enables us to keep our workforce in work that will be a huge benefit. It has been hard for everyone when people have had to isolate or shield from the virus.

“If we can get as many people vaccinated as possible and things return to normal, we’ll be able to have a cuddle with friends and family. If we’ve had a hard day at work, we would usually have a hug and say it’s going to be ok but we haven’t been able to do that over the last year. It will also be great when we no longer need to wear masks and can show our empathy more clearly.”

Throughout the pandemic Hilary’s job has been to ensure a smooth flow of patients through the hospital so that there hasn’t been a backlog or pressure on the Emergency Department (ED) at the RLI.

Hilary said: “I love my job. You come in to work every day and it’s a challenge to work through everything. By the end of the day, you have pulled most of the pieces together. It’s very satisfying. We have an excellent team; they all pull together and back each other up.”

Hilary has one big wish for the future: “I hope the vaccination programme will eventually bring some normality back to people’s lives.”

The NHS is the first health service in the world to deliver the new life-saving jab in the next stage of the phased vaccine programme.

Hundreds of new vaccination sites are due to come on-stream this week, joining the 700 which are already in operation.

The first Oxford AstraZeneca vaccinations will be delivered at a small number of hospitals (including the RLI) for the first few days for surveillance purposes, as is standard practice, before the bulk of supplies are sent to hundreds of GP-led services later in the week.

Aaron Cummins, Chief Executive, UHMBT, said: “We are over the moon to be selected as one of the first trusts to deliver the new Oxford AstraZeneca vaccination. This is part of the biggest vaccination programme in the history of the NHS and we are very proud to be playing our part.

“To think that we now have two approved vaccines against a virus that we had never seen before early last year is just astounding and this is testament to the incredibly hard work of all the scientists, research teams and the staggering number of people who chose to be part of research studies. All of this determination to come together means that we now understand the virus better than ever and are in a much stronger position to fight it.

“Our teams will continue to work alongside our Bay Health and Care Partners and colleagues in primary care to vaccinate as many people as possible and help protect them against COVID-19. There has been a fantastic team effort throughout the pandemic and this is continuing with our vaccination programme. I’d like to thank everyone involved and urge anyone who is invited to have the vaccine to do so; it really will help us save lives.”

The vaccine is easier to transport and store than the Pfizer jab, which has to be kept at minus 70 degrees until shortly before it is used, making it easier to deliver. In line with national guidance, the vaccine will be offered at the RLI to UHMBT colleagues who are at higher risk from COVID-19.

Those eligible to receive the vaccine will receive an invitation to book their appointment. For most people this will be a letter, either from their GP or the NHS. This letter will include all the information people will need to book appointments, including their NHS number. Residents are asked not to contact the NHS to get an appointment until they have received this letter.

Information on the COVID-19 vaccines is available on the NHS.UK website.

The NHS will begin administering the new Oxford AstraZeneca coronavirus vaccine tomorrow (Monday) as the health service rapidly scales up the biggest immunisation programme in its history.

The NHS will be the first health service in the world to deliver the life-saving jab, which was approved last week, in the next stage of the phased vaccine programme.

Hundreds of new vaccination sites are due to come onstream this week, joining the 700 which are already in operation.

The first Oxford AstraZeneca vaccinations will be delivered at a small number of hospitals for the first few days for surveillance purposes, as is standard practice, before the bulk of supplies are sent to hundreds of GP-led services later in the week.

Oxford University Hospitals NHS Foundation Trust, where the vaccine was developed, is expected to be among the first sites to administer it on Monday morning.

NHS chief executive Sir Simon Stevens said: “The delivery of the Oxford AstraZeneca vaccine marks another first for the NHS, and a major milestone in humanity's battle against coronavirus.

“The vaccination programme - the biggest in NHS history - has got off to a strong start, and by New Year's Day we'd been able to vaccinate more people than the rest of Europe combined. Now we have a second, more versatile, jab in our armoury, and NHS staff are expanding the programme as extra vaccine supplies come onstream, and the arrival of the Oxford jab, coupled with more Pfizer vaccine being made available, will allow us to protect many more people faster.”

Prime Minister Boris Johnson said: “The Oxford vaccine is a triumph of British science and I want to thank everyone involved in its development and production.

“From tomorrow, the NHS will start using the Oxford vaccine to give protection against Covid 19.

“We know there are challenges still ahead of us over the coming weeks and months, but I’m confident this is the year we will defeat Coronavirus and start building back better.”

Health and Social Care Secretary Matt Hancock said: “Through its vaccine delivery plan, our exceptional NHS has now delivered over a million vaccinations to patients across the UK. The vaccine is our way out and this huge achievement brings us a step closer to the normality we’ve all been working hard to reclaim.

“From tomorrow, the British public will begin to receive a second highly effective vaccine, starting with the most vulnerable and frontline care home and NHS staff, another significant milestone in the expansion of the vaccination programme.

“This will be a historic day, and cause for celebration, but it’s vital everyone continues to follow the rules and remember hands, face, space, to keep ourselves and others safe.”

The NHS made history when Maggie Keenan became the first person in the world to be vaccinated against coronavirus outside of a clinical trial at Coventry Hospital on the 8 December.

Around two thirds, some 524,439, were delivered to people aged 80 and over who are particularly vulnerable to the virus, meaning that around one in five people of that age are already protected.

However, a total of one million jabs were delivered by New Year’s Eve and vaccination is now being rapidly accelerated as more supplies come onstream in the days and weeks ahead.

Last week, regulators and the four UK chief medical officers announced that the gap between first and second doses of the Pfizer vaccine should be lengthened so that more people can be protected faster. Delivery of the Pfizer jab, the first vaccine to be approved, is therefore also now able to be accelerated.

The NHS is supporting GPs to reschedule appointments that had already been made as part of the effort to cut the number of people falling ill with Covid and save many more lives.

An army of current and former NHS staff have applied to become vaccinators, with tens of thousands having already completed their online training. They will be deployed as more vaccine supplies become available.

The new Oxford vaccine is easier to transport and store than the Pfizer jab, which has to be kept at minus 70 degrees until shortly before it is used, making it easier to deliver in care homes.

The NHS is giving GPs an extra £10 for every care home resident that they vaccinate by the end of the month.

A majority of care home residents are expected to be vaccinated by then.

NHS staff are also being prioritised now that more vaccine is coming on stream.

There are more than 700 vaccination sites.

Up to 100 hospital more sites are due to come online across the country, subject to final assurance checks, this week.

There are also another 180 GP-led services which are due to come online this week.

The following hospitals will start delivering the vaccine for surveillance purposes tomorrow ahead of the rollout to hundreds of GP-led services later in the week:

For further information please contact the NHS England and Improvement media team on nhsengland.media@nhs.net or 01138 250958